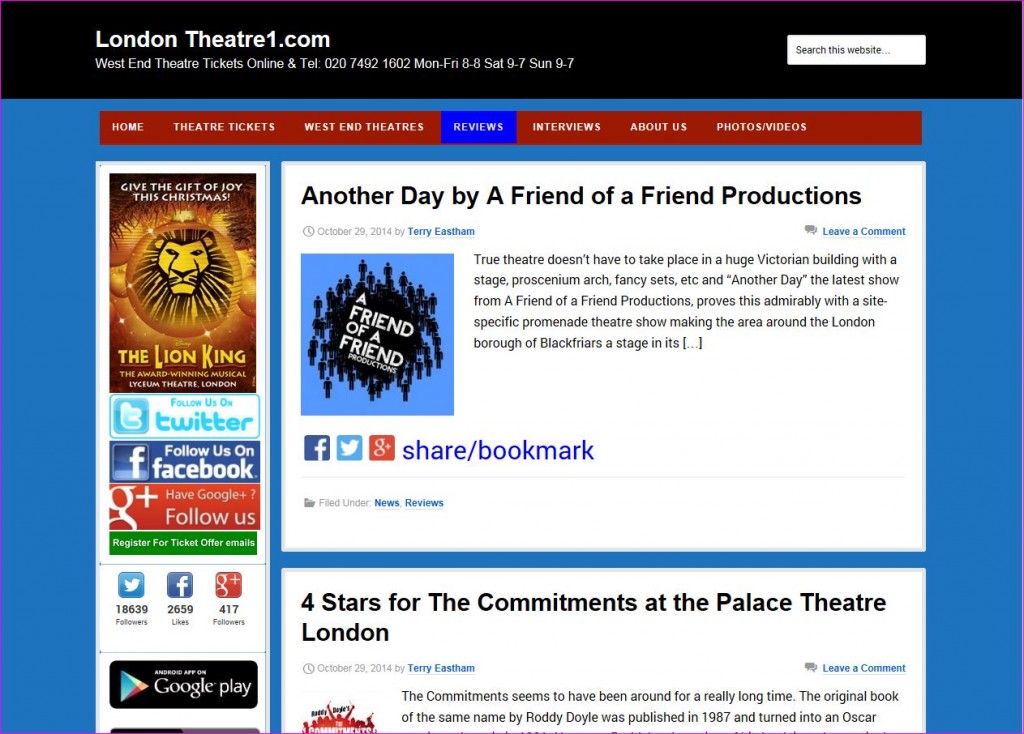 Sitting in the bar of the Mad Hatter Hotel, waiting to be told where to go, the audience were joined by one of the bar staff, clearing the tables and chatting away. It took a while for the penny to drop and there was much checking of programmes, before we all realised that Sian was a most convincing SE London bar lady being played by actress Terri-Ann Brumby and that we were in fact in to our first play, “Rose’s Turn” by James Robert-Moore.

Rose (Jenny Wills) is a ‘good friend’ of Sian’s. In truth Sian is a monster who dominates her – even telling her what she will be having to eat or asking a question then completely ignoring her answer while she witters away about her own life – until tonight that is. Rose has been reading a self-help book and is ready to face her nemesis. In a scene that was powerful and wonderfully acted by both actresses, Rose finally lets rip and by God, she doesn’t hold back. The everyday language of SE London is in full flow as Rose left and received a well-deserved round of applause. Of course the next question was, where to now? Upstairs to the bedrooms and our second play of the evening was the answer.

“Unspoken” by Aysha Scott takes place in the intimate surroundings of Room 101 of the hotel where David (Andy Umerah) and Rebecca (Rachel Keys) are in bed enjoying a spot of ‘afternoon delight’. Both locals by birth, David left the area to go to college and is now something successful in the city. Rebecca on the other hand has stayed in Blackfriars and now runs a pub just down the road. Over the course of this well-acted scene, we find out the truth behind David’s leaving to go to college and the changes in their lives since their happy days together as youngsters.

But that was then and this is now. As so often happens, life gets in the way and the two of them can’t spend forever in a hotel room. This could have been a difficult scene to stage but full credit to the cast and director for making such an intimate glimpse of the characters’ lives seem very natural as we followed their short but powerful story.

After this, it was back to the bar waiting for our Turkish born London tour guide (Shivani Kapur) to show us the sights of old Blackfriars. Arriving in ‘authentic Pearly Queen’ outfit the tour guide walked us out the door and we were off to Christ Church, Southwark and “Beautiful, Beating’” by John Hamilton May where we meet Meg (Denise Mack).

Meg works for the church and is just finishing for the night when Phil (Ian Mairs) a corporate type from one of the many developers in the area comes bustling in looking for the vicar to make his confession. Meg’s instant dislike for Phil is palpable and it really looks like these two are going to be at loggerheads throughout the play. But Meg is not a hard woman really and Phil is a man with an English reticence and a desperate need to speak to God. Instead, he talks to Meg and in what was one of the most touching scenes of the play, the relationship between the two of them changes, possibly forever.

After dropping off some bags of rubbish, our tour guide returns to take us on the next stage of our trip, a good old-fashioned SE London pub beer garden where the next play “Ribbons” by Lucy Beacon is set.

Here we run into Rebecca once more who is having problems with a ‘lady of the Night’ Veronika (Claire lane) looking for one of her clients in the garden. There is a lovely clash of personalities between the two ladies and some interesting moral questions arise such as; which is worse, sleeping with a man for money or marrying a man for his money? In the end, are these two all that different? Before that can be fully resolved in the minds of the audience we were whisked off again to the next location – accompanied by the funniest version of the old song ‘London’s Burning’ I’ve ever heard. Along the way, we literally ran into the next play “The Artist’s Dog” by Ben Norton Davies, where our intrepid and fearless tour guide took on a local would-be Banksy (Alex Harvey) befouling the walls with his ‘art’ and political statements.

This was my favourite play of the evening, with the two unnamed characters really going at each other in an attempt to get their point of view across. Tight scripting and superb acting meant that the audience at times agreed with each of them despite their contradictory opinions about the ‘gentrification’ of the Blackfriars area and its effect on people from this side of ‘The Cut’. The Artist was very forthright in expressing his anger as he saw his beloved South Bank destroyed by an invasion of high priced apartment blocks and coffee bars with nothing accessible for him and others born and bred in the area. At the same time, the tour guide tried to make him understand his luck and good fortune in living in such a vibrant and diverse place. I would imagine conversations similar to theirs happen regularly all over this part of SE London as the developers move in and price the locals out of the market.

Our final piece “Loose Ends” by Claire Squire led us to a local restaurant where we once again met up with Rose and various other characters. Not every loose end was tied up, rather like life itself, but enough were to ensure the evening finished on a good and very believable high.

A truly amazing piece of theatre where the sights and sounds of the ordinary world enhanced the action. Skilled writing and a wonderful cast made me a part of their various convoluted, but really perfectly normal, lives as if I had been living in Blackfriars forever. Special credit has to go to Shivani Kapur for the truly pivotal role of the tour guide delivered with consummate skill, good humour and total believability from start to finish.

So, a wonderful evening all round. 6 great plays, 9 marvellous actors and even a bit of local history thrown in. Blackfriars will never be the same again.

By Terry Eastham for LondonTheatre1