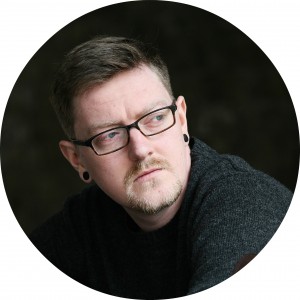 Ben, ANOTHER DAY will be the second time you have worked with A Friend of a Friend Productions can  you tell us a little bit about the first time?

Yeah, well I was fortunate enough to have a play in the ‘Scripted’ event at the Southwark Playhouse  last year.

Is it really? Bloody hell, time flies. Okay so I had a play in ‘Scripted’ two years ago; a little comedic  two hander about unrequited love called “A Misunderstanding” which had just been shortlisted for the Soho Theatre Westminster Prize. I enjoy playing around with staging conventions in my writing and I came up with the idea of a piece that worked as a single narrative but told by two people in
separate spaces… it seemed to go down pretty well.

It really did. So what have you been doing since then?

You know the joy of it was I actually met with a number of people in the bar after ‘Scripted’ who had enjoyed what I had done and wanted me to work with them. That was a great feeling! So that night I was commissioned to create a piece for Invertigo’s ‘Seven’ event at The George Tavern in Shadwell. Then that in turn led to me writing a longer piece for them entitled “A Marked Man” that was presented at the 2013 HighTide Festival. I have also had works performed at new writing nights across London. Oh and I’m working on a screenplay… but then isn’t everyone? 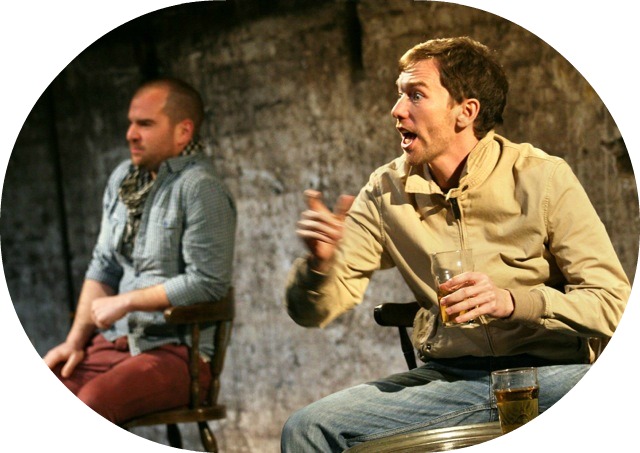 Nick Read and Ben Worth in A MISUNDERSTANDING

A question we are asking all our writers is predictably enough; “did you always want to be a writer?”

No, not really. Don’t get me wrong; I’ve always enjoyed writing, but I actually went to university with ambitions of being an actor. Then while I was there I wrote a few plays for coursework that were well received, and then I started writing stand-up routines and comedy songs that I would perform at local pubs, and I guess I just found myself drifting more in that direction. Even now though I don’t really think of myself as just a writer as its only part of what I do, part of who I am I guess.

And what are the other parts?

Eurgh. I don’t know. I hate these kinds of questions. I do a bit of everything I guess; writing, illustration, comics, design… and then there’s the day job as a follow spot operator.

Can you tell us more about that?

About follow spotting? Well I point a big light at a stage…

Ha. No; about your design work.

Oh right, okay. So I created the webcomics ‘My TV is Evil’, ‘Catatonic’ and ‘Modern Life is Awesome’, and I’ve done logo designs and posters for various clients. I’ve also done artwork on iPhone apps and various websites. Most recently I designed the cover art for Jenifer Toksvig and David Perkins adaptation of ‘The Nutcracker’ for Samuel French, which we are currently developing into an interactive app book. So yeah; to go back to the question “did I always want to be a writer?” I guess I just always wanted to be creative, you know?… Damn, no; don’t put that.

Well it’s a bit of a wanky answer, isn’t it? You know what; ask me again.

Okay. Did you always want to be a writer?

Ha! Okay can you tell us a bit about your writing process? Do you sit down with a definite idea or do you just start typing and see what comes out?

I guess a bit of both. I fill notebook after notebook with ideas, and thoughts, and overheard conversations but naturally not every one of them will develop into something. I’m not one of those writers that handcuffs themselves to the computer for eight hours a day, I tend to focus on an idea with a rabid ferocity for as long as it feels exciting and then if I haven’t shaped it into something in the first week or so it tends to drop down into the “work in progress” file where it moulders, half-forgotten, until I rediscover it when I’ve lost interest in the next thing, do you know what I mean?

But still I would say I write most days; on the bus, at work, in cafes, you know? I’ve constantly got three or four projects bubbling away at any one time so I’ll flit between them constantly editing and revising. Of course sometimes you get lucky and people ask you for something specific; and I love it when that happens because in many ways it makes the process easier; having that pressure to deliver… you know that absolute threat of a deadline? It cuts out all the procrastination and forces you to, well… deliver.

We know what you mean.

Ha. ANOTHER DAY focuses on the residents of Southwark and in particular Blackfriars, can you tell us a little about your connection to the area.

Well I have been a Southwark resident for about 10 years, first in Elephant and Castle and now slightly further out in East Dulwich. I love South London, especially the genuine sense of pride that people have for the area. I also love how you are only ever a few minutes from a park, I’m not a full on tree hugger or anything but I do like to sit in the shade of a tree with my ukulele on a sunny afternoon. As for Blackfriars itself I am quite familiar with the area as I often cut through on my way to and from work but thanks to working on this project I’ve been spending more time in the area and spending more money in the many bars! This summer I happily ended many an evening staggering to the 63 bus stop on Blackfriars Road! You know, I actually set “A Marked Man” in Blackfriars? Admittedly a slightly dystopian future version of Blackfriars, but still… I was drawn to the dichotomy of the area, extreme wealth and extreme poverty rubbing against each other in such a confined space, and then you’ve got the sense of history in conflict with extreme modernisation and the fact that you can see these changes in the skyline happening daily, happening relentlessly; it makes for a strong visual metaphor for modern society. It’s actually been extremely satisfying to revisit these ideas and have them inform the piece I’ve written for ‘Another Day’.

Ben Norton Davies is the writer of ‘The Artist’s Dog’ for ANOTHER DAY.

Check out his comics: