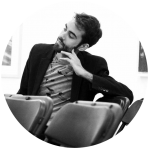 As part of our #whatsyourstory campaign towards the BLACKFRIARS STORIES events programme with Southwark Council in 2014, our Associate Artistic Director, Patrick Maubert, shares a memory of Blackfriars.

My tale from the Blackfriars Mile comes from a fairly awkward first date.
I had recently tried my hand at the silliness that is Tindr… I felt I needed a stupid distraction from my typical routine.
I met a cute chap…4 years my junior, and hoped to have a nice dinner, quick drink and perhaps a rerouting to my bedroom. It was to be all very easy, breezy and casual. Aren’t most first dates these days? Apparently not:

Midway through our enchiladas at Blackfriars’ own Picante, it became quite clear he and I had as much in common as chalk and cheesy nachos. Not only that, it was evident this lovely young chap was going to be a gentleman and not agree to that wistful rendezvous without some serious strings.

As I am a man of honour and integrity, I told him I didn’t see a future with us (per se) but would he like to come back to mine to finish the night in more physical terms?
Miraculously, he agreed! But first a nightcap at the Blackfriars Wine Bar. Success!

The walk over the bridge must have allowed the cold, hard facts to be absorbed and it was apparent the energy and mood had turned sour as we settled into a cozy booth. In a cruel twist of fate, we found ourselves starring at another couple.
Their mood had most certainly NOT soured as they were entangled within each other’s passion in a sloppy, frantic make-out sesh. Their eyes 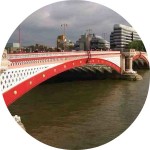 unashamedly met ours as they boasted they were on a fabulous first date. My Mr. Tindr chirped in that we were as well. He then thought it was high time he unmasked my unsavory intentions to our first-date comrades.

She, our neighbour in the broadest Brisbane brogue:
“What?! So he thinks he can wine, dine and ROOT ya?” she queried
“Apparently so. I was so hopeful this time around,” he cried with disappointment

At this point, the lesbians in the corner piped in with similar disgusted daggers being shot through eyes and words.

I became the most unpopular dick-head in Blackfriars, and quite possibly London proving that you simply cannot have your cake and eat it too…